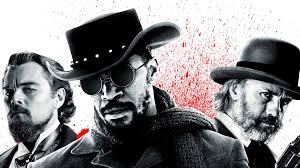 Dr Schultz became a bounty hunter, but only after

Plucking molars for a living did not render

His life even a Quentin pleasanter.

In his adventurous rounds he found a slave,

Whose name you can never pronounce, save

Only with silence observed in the ‘D’ of Dave.

Unlike the cherished country mango

Was the colour of Schultz’s find, Django,

Who, in search of his taken wife, was on a long go.

Schultz found in a White estate the wife

And himself ran into an irreversible strife,

For, in the end, from him was taken his life.

The estate and its Whites amidst blood flowing,

To live happily ever after with his dear wife following.