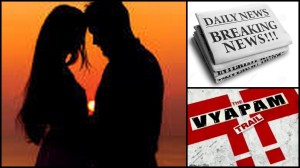 ‘I love you,’ Mythili Rajagopalachari whispered, wiping her tears with the back of her palm. Her right hand was clasped tightly in the firm, consoling grip of Aravindan. She was on her knees before him, and he was sitting on a wooden chair behind his oblong office table.

‘I know, Mythili. I know. But you need to understand my situation. Marriage is not on my list of priorities as of now. You know what I would say. I have got to improve this office; make it a big newspaper company, you know. My friend, Deva, needs my support now. We are undergoing a rough patch. Circulation is getting worse,’ Aravindan finished emphatically, hoping she would understand his position.

‘Can’t you change your mind for me? Can’t your newspaper wait?’ she implored, the tears streaming down her pretty, brahmanical face falling as droplets on Aravindan’s feet.

He understood that his newspaper company, which was in dire need of all the attention and finance he and his friend could come up with, would not convince Mythili’s mind about her proposition of immediate marriage to him. He played a different card. ‘Even if I agree, your father wouldn’t give you in marriage to me. Do you remember what he said about me coming from a lower caste, and that too right at my face?’

‘As well as the article you wrote in your newspaper the following day, attacking caste discrimination in society, suitable titling it “the Brahmin tenets”. Now I am not asking you to come plead to my father for my hand. Take me away with you, Aravind.’ She spoke boldly, her voice husky. Aravindan looked deep into her eyes, searching for words.

‘Why is it so urgent that we marry –’ he began.

‘I am carrying your child.’

26 year old Ashish Chaturvedi ran for his life, and more importantly, for his country. Stabbed in the gut, the whistleblower in the Vyapam scam ballparked his wound to lethality within minutes. He knew he was dying.

He pulled his body forward with his every step. Running alone under a full moon in the State Highway, with files, documents and recordings clutched tightly under his armpit, he knew it would only be minutes before he met his death – either by losing blood or even cruelly when compared to getting caught by the goons looking for him all over the State Highway. They had already found and killed the other whistleblowers in the scam – Prashant Pandey and Anand Rai – and mercilessly, even their families. The government’s promise of round-the-clock protection for whistleblowers and a Supreme Court monitored-CBI inquiry into the scam went down the drain. He somehow had to get those incriminating proofs to the media as he knew authorities in his state were corrupt and unreliable.

Ashish Chaturvedi opened his weary eyes wide on the sight of an approaching lorry. He waved his hands.

‘The chief Justice wants a quick response regarding the FIR registered on me. What do I do now, Shivaram?’ Ram Suresh Yadav, the incumbent Governor, shouted suddenly and surprisingly – given his age – with a strong voice.

‘I can’t pull anymore strings Ramji. Not that I don’t have influence, but I just don’t want to make a move until I am sure all those patriotic fools are dead and decomposed and the evidence is secure. They have spoken to the media already and accused me,’ the CM retorted reverentially.

‘And you deserve nothing less for dirtying your hand with all the fraud admissions and your association with that kingpin, Jagdish Sagar,’ the old man was losing grip on his tongue with his every sip of the single malt whiskey.

‘And didn’t you get your share of the fraud money for turning a blind eye in situations like this?’ The reverence was fading away.

The door opened and his secretary entered. The sari she officially wore in the mornings was now replaced by a mini-skirt and cream blouse. ‘You have the Prime Minister on line two, Shivaram.’ She clicked her tongue immediately for having uttered his name in the Governor’s presence. Their affair was not yet public, and she wished it to remain so. ‘He’s calling oversees from Ufa.’

Shivaram rushed to the phone on his desk. ‘Prime Minister, Shivaram here.’

‘Uh… not yet Modiji. But I have sent my own men in search. I will soon bring you the good news.’

‘You better. You are well aware of the fact that our party has won the election on a corruption-free note. I don’t want to destroy the party’s image because of your carelessness and endless murders. What is the count now? 48?’ he paused. ‘The man in the white kurta from the opposition is already raising slogans. I have just closed the Lalit-Modi case. I can’t answer for another.’

Shivaram Singh Chouhan replaced the receiver, and the phone began ringing instantly. He picked it up peevishly. ‘Chouhan here.’

‘Ashish Chaturvedi is dead.’ The voice on the other side spoke impassively.

‘The documents and cassettes?’

The headline was accompanied by a picture of the Madhya Pradesh CM and whistleblower Ashish Chaturvedi separated by a thin line. The eight columns of news occupying the first half of the front page was continued in the middle sections of the newspaper with texts quoted from the evidence documents and audio cassettes.

‘Will you at least explain now, Deva?’ Aravindan asked inquisitively. His friend had come from Bhopal the previous night and today morning he made headlines in their jointly owned newspaper.

‘I met my people in Bhopal and was returning by a lorry with the money I could muster. Things seemed very hopeless. Our newspaper losing readers; our financiers backing out…. And then, while I was coming on the highway I noticed a heavily injured man trying to stop us. He shoved a pile of documents into my hands and requested me to get them to the media. He then gave me a couple of blood stained currency notes as an afterthought. He looked like the living image of hopelessness. The rest is in your hands,’ Deva indicated the newspaper Aravindan was holding. A huge machine by their side was conveying neatly folded copies of the newspaper.

‘Where is he now?’ Aravindan whispered.

The circulation of their daily increased exponentially. Other dailies, television channels and the internet started picking up the news. The government shouted for an inquiry into Aravindan’s newspaper.

The ruling party’s headquarters in Chennai was attacked. Its president Tamilisai Sundararajan was hospitalised. Whether she was wounded remains a doubt.

Chouhan was as good as dead.

The telephone on Deva’s desk rang – for the seventeenth time that hour.

Minutes later he opened Aravindan’s cabin panting heavily. ‘Ashish Chaturvedi called now. He is in Chennai apparently, and said he wants to meet us urgently – ’

‘Yeah. Central Railway Station. He asked me to bring all the evidence he gave and said he would add to it more documents before the inquiry into our newspaper starts.’

An hour later Deva slowed his bike opposite the Central Railway Station. He looked in his rear view mirror to make a U-turn to get to the entrance of the huge red-painted building. Aravindan tapped his shoulder and got down.

‘I need to make a call to Mythili, Deva. I want to tell her I would be late.’

‘Sorry I didn’t tell you this previously, but… we are getting married today. You were busy with the news. Look, it was all sudden. She is pregnant with my child.’ The last sentence he said to his feet.

After a minute of digesting everything, Deva said, ‘Make it quick.’ And then he added, ‘Congrats, by the way.’

Remembering to recharge his mobile he went to a newspaper mart nearby and asked to use a pay phone. Mythili’s father picked up after a few rings. Aravindan replaced the receiver. He scrolled through the phone book in his mobile for Mythili’s number. And then it caught his eyes.

A thin sheet of paper tied below the pay phone and displaying headlines in Tamil screamed in bold red letters the news that Ashish Chaturvedi was dead and that his body was found nearby a railway track outside of Bhopal the previous night.

If Ashish Chaturvedi was long dead, then who had telephoned Deva that morning?!

Aravindan had barely turned to rush to the Railway Station when the blast brought down a part of its building. The explosive sound stopped his heart for a couple of seconds. In the iris of his eyes the brilliant flame could be seen dancing. He then understood the plot to destroy the evidence and everyone aware of it.

At nearly the same time, a man walking on the platform outside of the burning station spoke calmly into his mobile. ‘Proofs are destroyed. But only one came to the station. I couldn’t take the risk of waiting for the other, but I will find him. And it all happened like a terrorist attack… just as you wanted.’

Wiping the tears and struggling to come out of the nervous breakdown, Aravindan boarded a bus to Thiruvanmiyur. With hands still quivering he tried focussing his mind while moving in the rickety old bus. About fifty people were already dead in Madhya Pradesh, and he realised the people behind it would stoop to any level to shun incrimination. Everyone coming across the evidence ended up either in a cold marsh or in a mysterious suicide.

Next would be him. And then Mythili. By that time he knew it was too late for his friend and himself, but not for Mythili. He didn’t take more than a minute to come to the decision; a decision taken for him.

He lost track of time. And when he climbed down the bus he let his eyes search. On the opposite side of the road, outside the District Registrar Office, Mythili was standing. She was enveloped in a bridal sari and was looking on both sides of the road, obviously expecting Aravindan. He wanted to cross the road and throw his arms around her, but fear got the better of him. He didn’t want anyone to see her by his side. It would simply be putting her life in danger. He knew men are responsible for protecting their lady love from certain people, but in his case, he admitted bitterly, he had to protect Mythili from himself.

There wouldn’t be any more turbulence for the ruling party and all the corrupt people involved in the scam now that the evidence has been destroyed. Weather and politics could never be predicted in India. Life for them would return to normal. But life for him had just taken an irrevocable turn. He would have to lay low for time unknown. He would have to refrain from getting in touch with Mythili… maybe forever. But whatever happens…

‘I love you, Mythili.’ Aravindan whispered, wiping his tears with the back of his palm.