‘But I wanted a Komodo dragon.’

‘And I wanted to spend the vacation in our island, not in this forest flicking mosquitoes,’ is the complaint of Alex’s daughter, as she applies a squeeze of lotion on her wad of face and throws away the pulpy tube. Its crinkled body shows it contains palm oil, possibly from Alex’s plantation a few kilometers away in Sumatra.

‘Darling, only this summer. Dad has to iron out his business here,’ enters Mother in a flaring skirt and sunglasses. An Asian brings her a basket, bows, and departs watching the orangutan. 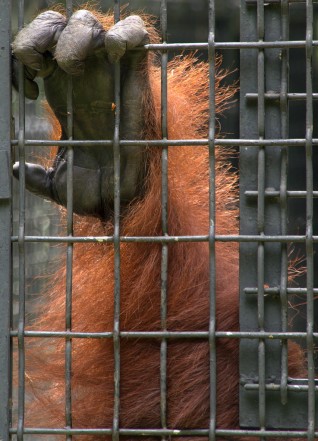 Referenced from web* [labelled for reuse]

Outside the guest house, shards of sunlight fall through the porous green cover. All around is air chill and herbal. Deep into the woods, whereto the Asian is now driving Alex, empty patches of land are expanding, like an aging man’s balding head. Hired lumberjacks fell trees in a hormonal surge of productivity. Fires engulf the rest and reduce to charred lumps. Elephants try to flee the puissant intrusion, but elsewhere seeing only lands stranger to their nature, they fall with the trees. The feet of orangutans, unaccustomed to the touch of earth, jiggle in search of their crusty habitat, umbrella leaves. Meanwhile, Mother clicks photographs of her surrounding and shares with her clique and calls out serenity, inner peace, natural unction and unhurried relaxation in her self-pandering captions.

In the backyard, Nick pokes with a twig the orangutan captured for him. It jumps and rattles the cage. The nail on one of its toes has been uprooted, leaving the cuticle to the flies. Nick slowly brings his finger into the cage; the orangutan watches closely. He takes his finger to its underarm; it smiles. As he wriggles his finger there, the ticklish ape responds with laughter. Nick, satisfied, next inserts a banana; the orangutan grabs his hand. Nick drops the fruit in panic and shouts.

A flaring skirt is lifted as it anxiously sails across the courtyard, the living room, disturbs a jar of cookies (containing palm oil) in the kitchen and enters the backyard, overflowing with tension. Nick smiles to Mother and motions it is nothing. The orangutan has just picked a flea from his arm and stuffed it into its bulbous mouth.

Hearing the gasps of Mother, the ape turns in its cage. Moments later, rills of tears stream down its eyes. In them, if you watch closely, you can see the flare of smoke rising in the wild brown yonder. It figures the burning place as where it has lived all its years and raised its children. The sight of the smoke is a plunge into uncertainty regarding its family. The last it has seen its family was during their expulsion after their home had been toppled into a plantation of oil palms.

It stands crying, as Mother drags Nick away from the cage. After all, the orangutan is only 97% human. The remaining animality does not render it capable of inflicting the kind of harm natural only to humans.

For further factual reading of this topic: Guardian article on how palm oil producers are wiping out orangutans.

This is a short story that accompanies a crisp 3-minute dramedy, if you prefer to watch it first.

A pair of shackles, marrying two wrists – one umber, the other a shade darker – restricts the free accompaniment of their swinging arms, as the two saunter in the shade to the sound of stressed gravel.

Both the Constable and the rogue are calm. On top of it, the Constable is amused. Birds chirp on their way, as if in expression of curiosity at this duo. Looking at their faces, it seems they do have a tale between them.

That morning, as the residents of the colony go about their daily tasks, the wheel of routine stumbles on a dark, bald head. It is the man who is soon going to be shackled to the uniformed figure. What is his buzzing eyes looking for in that colony? Standing in a corner, why is he frantic about the movements around? One of the residents spots him and doesn’t feel alright.

A stone’s throw from this corner (if thrown by a powerful arm) is a dunce squatting on the sideline of the injured tar admiring a fruit in brown. He looks at his friend nearby and says it was kiwi bought by his father on his way home from Delhi. Delhi is obviously so far away and foreign to this boy, probably his father was a first in their familial travel history. The other, receiving the fruit and upon a slight glance, declares it is no exotic kiwi, but only a local sapota, mostly bought at the decaying store located at the entrance to their colony. So furious, so injured, the dunce stands and collects his prized fruit. A flaunting Constable appears by the arising squabble.

He climbs a staircase, beating his lathi on his thigh, and reaches a door, indistinguishable from others in the colony; but the policeman is in front of this particular door on a purpose. He slaps it and shouts a name. A boy, son of the shouted name, nervously opens and testifies the absence of his father. His father is not a person who can pass through the legal books, so he himself feels justified at the tremor in his voice.

The policeman, there on purpose, pulls him outside, barges in and shuts the door, all done in a lubricated jiffy. He is careful to close the windows and doors and only then turn around the house, looking for something. After a few neat minutes, he opens the door and tells the son he has got the ‘packet’. Packet? You and the son ask. Yes, euphemistically powder. But he is not very discretionary, he says he identified the packet of cocaine stashed behind the grinder. And then, he asks the boy to convey this to his roaming father, so that he himself will come looking for him. And that is how it came to be.

Is this the tale?

Birds chirp. Gravel squeak. How many days? So today had been the day to get caught, the Constable pokes. I didn’t expect at all, just thought of passing by, but the lucky wind has turned around today, comments the rogue. Not some lucky wind, my job is inherently hard, you must admit, defends the Constable. Whoever asked you to carry on in this job, exclaims the other. Who was there to advise me against it, so I just kept on in it, the Constable says. All crooks say the same thing, says the other.

This is the tale.

Once the Constable is outside the colony, he is not able to restrain himself from taking another look into the packet. He unwraps it and – jewels! Gold bangles, chains and a glimmering necklace. He satiatedly smiles to himself and proceeds. The Constable in mufti, dressed like a rogue and on the watch since morning, rats out of his snoopy hiding place and jumps on the thief who’s modus operandi – if such a sophisticated term could be employed to describe the pettiness of his thefts – is to dress up like a policeman and conduct searches around known criminals’ rests.

Watch this story as a 3-minute film here.